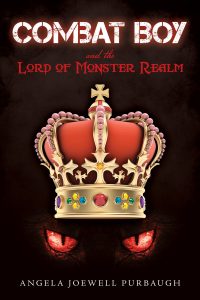 Combat Boy And the Lord of the Monster Realm

A fast-paced romp of a read

On the other side of an interdimensional portal lies the game world of Monster Realm, a place where monsters battle humans, where souls are held captive, and where Tom Hock, also known as Combat Boy, narrowly escaped. Now, he’s home and feeling safe – big mistake.

Tom’s brother, Joey wants to play. He paralyzes Tom with a poison dart and reassembles the fabled monster token to start the game, which spreads across San Diego. Now, Joey is the boss. He makes the rules and designs the monsters, but what kind of game will a scatterbrained teen create?

Tom charges through the game’s wacky, twisted, and hazardous levels, alongside a band of misfit gamers and vows to sacrifice his soul to save San Diego. But is that enough to beat the game and stop Joey from unleashing his master plan of ruling as Lord of Monster Realm forever?

Buy Combat Boy and the Lord of the Monster Realm

Now available in Kindle and Paperback
Buy on Amazon

Kirkus Review for
Combat Boy and the Lord of Monster Realm

Purbaugh (Combat Boy and the Monster Token, 2014) returns to the saga of Tom Hock and his adventures with the
Monster Realm in this middle-grade novel.

Mere hours after becoming the Multidimensional Game Master and saving his soul (and his brother’s) from getting
trapped in the Monster Realm, Tom, aka Combat Boy, just wants to relax. Unfortunately, his brother Joey is still
addicted to the nectar of flowers from the Monster Realm, and it’s making him do crazy things. After paralyzing Tom
with a poison dart from a fortuneteller spider, Joey assembles the Monster Tokens and restarts the Monster Realm game.
The game spills over into their native San Diego, causing the streets of the city to fill with terrifying flying demons and
vanilla-scented knockout fog. Once Tom regains muscle control, he quickly suits up as Combat Boy and heads out after
his corrupt brother. He must gather the same players that he recently competed against in hopes that, by working
together, they can beat the game and stop the Lord of the Monster Realm. Combat Boy has already defeated the game
once, but this time the level is San Diego, and the boss is Tom’s own brother, and if he loses, all the places and people he
knows will be sucked into the Monster Realm forever. The only question, as phrased by the game’s coordinating troll, is:
“Combat Boy. Are you ready to get your game on?” Punchy and propulsive, Purbaugh’s prose sucks the reader through
the plot of this sequel, which, as in the case of the first Combat Boy story, is structured to resemble a video game. Little
time is given for setup or exposition, and when it’s offered, it’s usually while characters are already running straight into
the action. As with most video-game sequels, this volume is a variation of the old formula as opposed to something
completely new, but fans of the first book should be pleased by the continuity of story, characters, style, and tone.
Breakneck pacing means the end comes quickly for Tom and company, but a cliffhanger indicates another volume in the
series is in the works.

A satisfying video-game sequel for fans of this action-hero series.