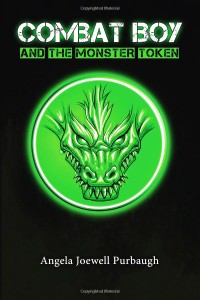 Combat Boy And The Monster Token

Night at the Museum meets Comic-Con with a cosmic twist

Tom Hock dreams big. He wants to be the greatest pro gamer in the world, and he’s got the skills to make it. Right now though, the twelve-year-old’s happily exploring San Diego’s Comic-Con with his older brother, Joey.

While at Comic-Con, Tom makes two discoveries. The first is the existence of Monster Realm, a mysterious game played deep beneath the convention floor. Those who win the game earn the coveted title of Multidimensional Game Master. The second surprise is Dark Pixy, a cute, butt-kicking pro-gamer with a hidden connection to Monster Realm.

Good thing Tom and Pixy aren’t normal gamers. But as they struggle to reclaim their bodies, something within the game also wants access to the real world. If it escapes, no one will survive to attend next year’s Comic-Con.

What People are Saying
about Combat Boy and the Monster Token

Great fun for gamers or anyone who loves an adventure

I completely enjoyed this book. I got this for my 10 year old son who loves to read. I usually read his books first, if they are from new authors.

This book had it all. It is contemporary, relate-able and even funny. I found it as as enjoyable as Percy Jackson, Harry Potter and other notable books in this category. My son is half way through it and he told me LOVES it….. “Really good” to be exact.

I LOVED this book

Coming from an adult whose only video game history was Colecovision I felt right at home as I understood the life Angela displayed in her writing and was happily “sucked in” while feeling like I was the young man in this story. I highly recommend this book for any age and anyone who wants to get away and live a secret life. 🙂 Great writing!!!

I was looking for a book for my 11 and 13 year old nephews for the holidays. I decided to get them this book since they are really into video games. Before getting them the book I downloaded to my Kindle to read it as I wanted to make sure it was something they would like and I also was interested. Wow was I pleasantly surprised. What a wonderful book-very fast paced and keeps the reader constantly engaged. Even as an adult I found the book completely captivating and capturing my attention. I highly recommend this book to both young and old.

Like the video games that the author takes as her inspiration, the novel is a colorful, welcome distraction from the mundane struggles of the real world. (Read the full review here)

View all reviews from readers